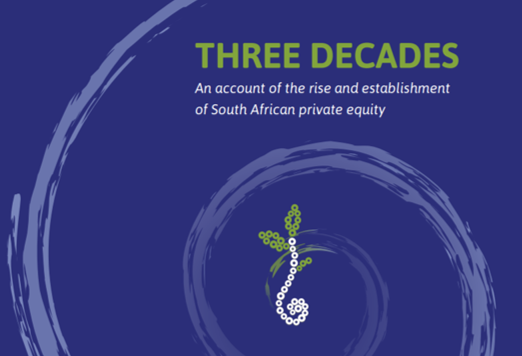 An Extract | Originally published by SAVCA: Three Decades: The Evolution of Private Equity in South Africa 2015

With limited resourcing, the SouthAfrican venture capital industry nevertheless has delivered numerous successes, each of which highlight the potential of this market. Samantha Pokroy, founder and CEO of Sanari Capital, refers to the Ethos Technology Fund’s investment in the mobile messaging and transacting business, Clickatell, which achieved Silicon Valley backing from world leading VC, Sequoia Capital. There are also well-known exits, including HBD backed Fundamo and CSense, which were sold to Visa and General Electric respectively, the sale of One Digital Media to a consortium including RMB Ventures and Bopa Moruo, and Via Media’s sale to Blue Label Telecoms. “There was also the notable recent sale by Treacle Private Equity of Teraco to London-based Permira, resulting in the first large-scale investment by a major international VC firm in the South African market.”

On assessing success, Pokroy is philosophical, noting that, “success in VC should be measured differently in South Africa. In large and highly developed VC markets like Silicon Valley, it becomes a numbers game, where a few massive successes offset a great number of failures and write-offs. With the current small size of the start-up market in South Africa, and the still-developing skills base in both tech and general entrepreneurship, local venture capital fund managers have fewer opportunities with which to work and are therefore compelled to manage their risks and portfolios more carefully”.

Keet van Zyl, co-founder of Knife Capital, provides some context on perceived risks associated with VC: “While it is true that the mortality rate of startups in South Africa is considerably high, the failure rate of VC portfolio companies is comparatively much lower. This is partly because of the lack of supply of risk capital in the country, combined with active VC portfolio management.

Start-ups with traction attract attention and due diligences are more thorough. So, the companies that do eventually get VC funded have risen above the rest. Exits take a bit longer but generally entry valuations are not over-inflated by hype, so that balances out”.

Pokroy also highlights the impact of the regulatory landscape, which “has not always been conducive to supporting early-stage investments with global prospects. Nevertheless, through work by SiMODiSA, a public-benefit industry organisation working with government to enhance the entrepreneurial ecosystem, this should improve”.

Pokroy is upbeat about a better future for South African venture capital. “As the VC and start-up industry develops, grows and matures on the back of investment, skills development and experience, the prospects for successful innovation in the South African market grows substantially”.

Rumble in the Jungle: Predicting the Unpredict-able Scroll to top